While I doubt many foreigners will intentionally visit Drobeta-Turnu Severin, it’s right at the entrance in the Danube Gorges from Bucharest, which I know many would like to visit. So I thought that maybe it’s worth translating this article. After all, I’ve met a Pole man that had only visited Satu Mare and Suceava in Romania. If you (or him) ever decide to stop there, I wish you at least knew which the best attractions are.

Drobeta-Turnu Severin, due to its location, at historical crossroads on land and water, had a great strategic and commercial importance over time. Thus, it came to host a series of tourist attractions that contributed to its development as a local tourist center.

Most tourists arrive in Drobeta-Turnu Severin on the way to the Danube Boilers or Nera Gorges. But the city itself also has some important tourist attractions. Among the most interesting are the Foot of Trajan’s Bridge, the Roman Camp, the Iron Gates Museum, the Medieval Fortress of Severin and the Water Castle.

Museum of the Iron Gates Region

A walk through the city should begin with a visit to the Museum of the Iron Gates Region. I first visited the museum about 10 years ago and was pleasantly surprised last summer to find it renovated. I can say that it was a pleasure to walk through the halls and discover a small part of the history of these places. In the museum, in addition to a model of Apolodor’s bridge, there are models of the former fortresses that stood in the Danube Gorges and objects from different periods discovered in the area. Another section of the museum presents the animals and plants of the region. In the basement, there is even an aquarium with several species of sturgeons that live in the Danube. The Roman Camp in Drobeta-Turnu Severin

In the courtyard of the Iron Gates Museum you can find the ruins of Trajan’s Bridge and the old Roman Camp. Also, in terms of ruins, you can see an amphitheater and what is left of the Roman baths. They were built almost 2000 years ago and are a delight for history and archeology enthusiasts. The bridge over the Danube was built by Apollodorus of Damascus to simplify the passage of Roman troops and the necessary supplies during the second war between the Dacians and the Romans. 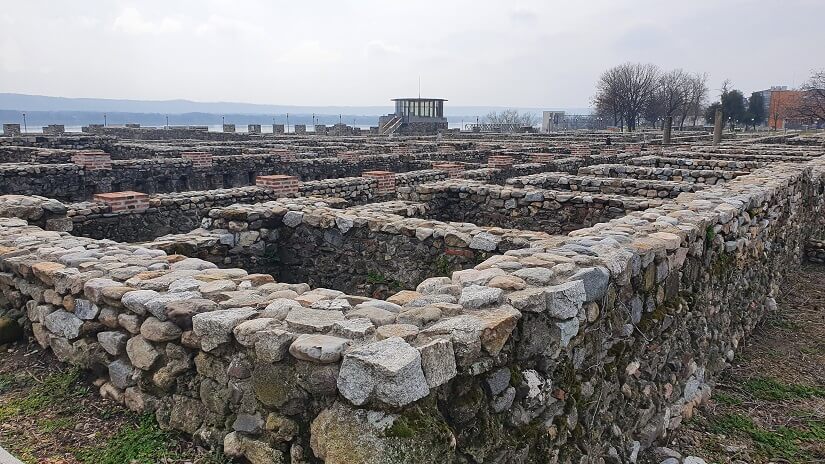 The Medieval Fortress of Severin

Even if it’s not as well preserved and as big as the Fortress of Alba-Iulia or Neamț, the Severin Fortress is also worth a short visit. The construction of the fortress began in 1233. At that time it was the most important fortress on the Danube. The one who managed to conquer the fortress of Severin, obtained access to the bridge over the river. Legend has it that there was a tunnel from the city gate to the other side of the Danube.

Alexandru Vlahuță described the fortress in “Picturesque Romania” as follows: “A once fortified fortress, defended by a deep ditch which, in times of danger, was filled in an instant from the Danube, thus placing it under a shield of water on all sides, squeezing it to the breast, like a beloved child , under her protective arm”.

The fortress has been renovated in recent years and re-included in the tourist circuit. The first thing that will catch your eye is the only towering wall left standing, called Sever’s Tower. It is reminiscent of the grandeur of the former fortress that guarded the Danube. Inside are the ruins of a small chapel. The Palace of Culture „Theodor Costescu”

The great palace is a real symbol for the city in Mehedinți county. It housed the city’s library, cinema, theater and museum in the 20th century. The theater with 700 seats had a rotating stage, unique in Romania. Currently, the palace has been renovated and regained its place in the cultural life of the city. Interactive exhibitions, pottery workshops, openings, concerts, plays and film evenings take place here. If it’s summer, you might want to watch the play of colors and lights of the Kinetic Fountain in front of the palace. The Water Castle in Drobeta-Turnu Severin

Before leaving for the gorge, I suggest one last stop at the Water Castle. It has also been recently renovated. Inside, there is now a four-storey exhibition. You can climb to the top of the 27m tower by lift or up the stairs. At night the Water Castle is absolutely enchantingly lit.

On the top floor you can go out on the terrace for a panoramic view of the city. That’s how I discovered that there is a pedestrian street in Drobeta. Also, on the top floor, there are two installations that illustrate the principle of operation of the castle. The tower was built in the early 20th century and supplied water to the entire city until the 1980s. The water supply came directly from the Danube. However, the most interesting part of the exhibition is on the 3rd floor, where there are some pictures from the sunken island of Ada-Kaleh. With the help of an application, some images come to life and you can witness short scenes from the daily life of families that once lived on the island. Some of the artifacts on Ada-Kaleh were moved to Șimian Island, near Drobeta-Turnu Severin. During summer you can reach it and see more closely the remains of this small Atlantis in Banat. After exploring the city and learning more about the troubled history of the Danube Gorges, don’t miss the opportunity of a cruise on the Danube. It is a special experience, especially since you can reach the Danube Boilers, the face of Decebalus and the Mraconia Monastery.

Port wine - everything you need to know about it
9 beaches in Thassos you don't want to miss
How to spend 4 wonderful days in Franconia, Bavaria?